What I’m wondering is if that works, then when i go to “Contractors”, isn’t it supposed to list all the jobs that I chose that contractor for? Do i have to create a column for this? or it does it automatically? I didn’t see one appear, so i created one and made it a reference attribute called “Jobs” (even though the column that it comes from is “Job Name”), but when i tried to start typing and choose a job, it comes up as “Unnamed”. the box is there with the job info in it such as it’s status etc, but there is no name. Do they maybe have to be named the exact same? I’m so confused. I did this with no problem in Airtable but I must be doing it wrong here.

Would appreciate any help

Do i have to create a column for this? or it does it automatically?

In your “Contractors” folder, there will be an “All Jobs” attribute, hidden by default, automatically created. You need to use the “Customize” button to make it visible under a specific table in “Contractors”.

Ok -I still must be doing something wrong. I am getting “unnamed” instead of the job names. Here are my screenshots of my “all jobs” folder and my “contractors” folder.

After I unhid it, I noticed that the linked column on the Contractors page is named after the folder title, but the names are coming from the “Job Name” column (which they should). Shouldn’t the column be called “Job Name”? (I tried doing this manually but it still didn’t work).

Edited to say that I think it might be glitchy. i started a new Test board just like this one. I added a couple of jobs and a couple of contractors and did the same thing (in the jobs board i created a reference attribute to the contractors). This time when i did it, when i went to click to add a contractor to the jobs table (in the reference attritbut column for contractors), the job boxes came up, but they were blank. There were no job names in them… ???

any idea why I am getting “unnamed” in the column that is automatically created?

Likely because the first attribute of the referred table was not text (for example was label).

You may try to remove the links first, duplicate the folders then link again

As you can see in my pics in my reply to J11, the first attribute in the table for “All Jobs” is “Job Name”. That attribute is text (Solana Ridge, COSA etc). The 3rd column there is the reference attribute which links to the “Contractors” folder (the column is named “Contractor”. That page works fine.

In the 2nd picture, you can see that in the “Contractors” table, I unhid the reference column that is auto-created. It is by default called “All Jobs” because it is named after the folder. The job names that it should reference should come from the “Job Name” column of the “All Jobs” folder. Is that possibly why it is not working? (being named after the folder instead of the column that the info is coming from?

If you look at the 3rd picture, which is what i see when i click the word “unnamed”, you can see that "Contractor Business Name is blank, and so is “Contractor” (although the contractor is in the box below). I’m not sure what is going on with that.

Would appreciate some help figuring out what is wrong! Is it something I am doing wrong? or is there a glitch? When i tried it again in a brand new board,(did it the same way), the boxes for the contractors came up for me to choose, but the names weren’t there -it just had their contact info. The Contractor names were definitely in the table, so i’m confused!

Hm… Okay, so presumably, you’ve created a Reference attribute in the ‘All jobs’ folder.

Now, once you have linked them, an automatic attribute called Back-reference in the ‘Contractors’ folder should be created.

And I can see that is the case.

But the value is ‘unnamed’ which means the data back-reference attribute is receiving is 0 (blank).

In the ‘All jobs’ folder, have you maybe created a new Text attribute which you’ve named ‘Job Name’, and your existing ‘name’ attribute is blank?

That seems like the only possible solution in this case.

I renamed the “Name” column to “Job Name” instead of hiding “Name” and creating a new one called “Job Name” (if that is what you are asking).

The first time, I believe i hid the “Name” column and create a new one with “Job Name”. Neither one of those worked.

In the Contractors folder, I did create a new text attribute called “Contractor Business Name”.

oh and here are some screenshots of what happened when i created a test board. The first screenshot shows that a contractor (VK Knowlton) has been added to the Contractors folder (along with some others). Then the 2nd screenshot shows where I have created a reference attribute in the “All Jobs” folder. I typed in VK Knowlton to search contractors. As you can see, a box comes up but it’s blank. It’s the box for VK knowlton though. I know because when i did this before i deleted the board and started over, i had their phone number in there. The phone number showed up but not the name. That seems like a glitch unless i’m missing how this works and doing something wrong by re-naming attributes or hiding the original.

woah!! i think i accidentally did something that fixed it all! In the screenshot below, you can see that the 1st attribute listed is “Job Name”, then under that is “Contractor Business Name”. Well, before I played around with it -it was the opposite. Contractor Business Name was first. I was playing around and attempted to see if I could move the order from this screen. I dragged “Job Name” to the top and out of the corner of my eye, I saw something change on the screen. I looked and all of the job names were back instead of saying “unnamed”. Either they just fixed a bug as i was doing that, or moving that fixed it. If it was supposed to be the other way around, i’m not sure how it got that way as i didn’t even know you could move them till just then.

anyway -just thought i’d share that in case anyone ends up having the same issue. (assuming it wasn’t just a bug fix just as I was doing that…lol!) 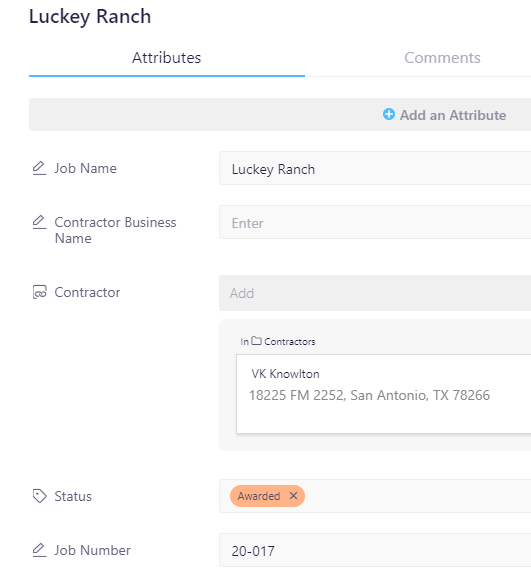 Thank you so much for helping us realize this!

This is super useful.

Glad everything is working fine now