Our team often starts with brainstorming, what has to be done for a certain project. So we build a mindmap with all our ideas, then we structure it and prioritize (that works well in a mindmap as you can collapse branches and only see top level elements). Then we start with prio one items from the mindmap and take them into our board as tasks. As they are linked you then see in the mindmap which elements we are currently working on and if we assigned a member to a task you see also who works on it and how the progress is.

So it would be great, if infinity could offer a possibility

(Meistertask and Mindmister have such a functionality at the moment and this is a benefit that no other tool I know have (and it would be great if infinity could have it too).

I second this request.

In fact, Zenkit have implemented this feature as one of their data views.

Mind mapping will grow in popularity once more people become aware of it and have good tools to use.

Having a native mind mapping tool that can be turned into a board with tasks, and sub-tasks would be a powerful feature and help differentiate Infinity to market leaders in the project management space.

The thing is: since we’re developing Gantt view currently, we want to collect as much feedback possible about it. Later on, we’ll decide the priority of mindmaps.

But the integration is more considerable than building our own new view.

Here’s a sneak peek of the Gantt/Timeline view: 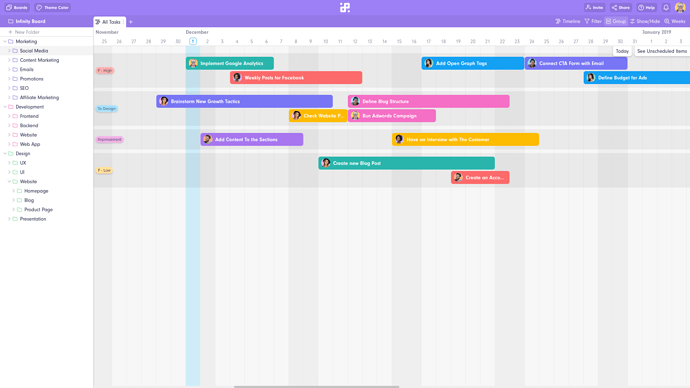 A lot of mind mapping software (and outliners) use OPML format, so importing/exporting it can be a first step.

Brilliant! If I could upvote this a hundred times, I would. @coa, are Mindmaps and Gantt charts an either/or type of thing? As in, Infinity can only have one or the other? Doesn’t seem like that should be the case.

Mindmaps are essentially simple bullet lists, which might be a place to start development (or, as @man suggested, just importing) and then build out functionality from there.

I feel that a feature like this—a mindmap SaaS built around Infinity’s existing Airtable-meets-ToDoist functionality (plus Gantt charts!)—could be a game changer. A single destination where the creative brainstorming can smoothly transition into decision-making and organization.

It’s not an either/or type of thing

We just planned to release Gantt first, and wanted to see where we’re at with time (regarding other features and improvements) with the Mindmap view.

It’s highly considered, as we’ve had a Mindmap in one of the previous version of Infinity (before we pivoted).

I 100% agree with you, and it’s our vision as well – One tool / place for everything

How is it going with Gantt view? Got any airing dates? Will it have dependencies (FS, SS, FF, SF)?

Just like I’ve written on our Facebook group last week, the production of Gantt started earlier this year.

However, we’ve had a few issues with team members working on that feature, and as we’ve had a lot of other high priority tasks, it has been put on hold last month.

I’m afraid I can’t give an exact airing date for now. We’re just all hoping to see it this summer, as our team/company is in a process of being expanded and enlarged.

Thanks for all the patience and understanding!

Thx for info, that’s bad news for me… but better late than never