My attributes list on a few of my boards has gotten a bit hectic… It would be nice if there was a place/way to manage the attributes in folders. e.g. what attributes are used in what company, what attributes exist in items that have moved folders (the invisible attributes).

Hey @BaiJie this is something that we’re trying to figure out how to ultimately improve the UX for attributes and how to best ‘explain’ how attributes works and how are they connected throughout the system. 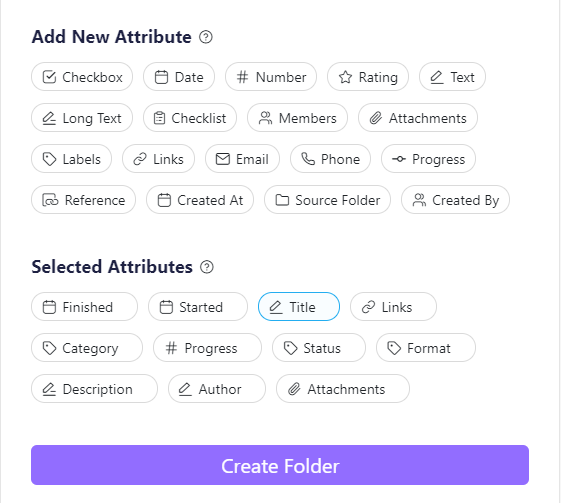 We were thinking that Folder Settings will solve the issue but it maybe made it even complicated to understand. Do you use this panel to add new attributes to folder?

I guess that we would need a special Attributes panel that shows how they are connected and in what folder they are used. As well as to manage them, reuse, delete, etc…

I have not used that panel before. I have had my Folder Architecture set in place for some time now, but there are new details that I add as my projects get more complex. The biggest problem is that I end up just creating new attributes when I already have one somewhere else in the project with the same functionality. When I get to this point, there isn’t any way to merge them together because the data is no longer consolidated to one. I think having a separate attribute manager would probably solve the problem, but I think there may be a better way to organize the UX from the get-go (a much harder project after everything is in production…)

I wonder if you could have a “hidden attributes” feature that allows the user to see all of the attributes in a board, but wouldn’t be immediately visible in a folder unless they were “added” to that folder. That way one item still has all of the attributes, but you can maintain the conciseness of certain folders that don’t need as much information. When adding more attributes, there would then be a list first of the “hidden” attributes that you could use, or create a new attribute for the entire project. You could select if that attribute is visible to just that folder, or to the whole project. When a new attribute is added though, it would be added to the whole board in hidden mode. Maybe a combination of these things would be the best.

Hi,
is there any place (now or in developement) where it’s possible to manage attributes, where we can check where attr. are used? (only way I can find out now is to make a new folder, but that’s not enough)

Hey @Bartosz, like Stefan said, we’re still trying to figure out how to solve this matter and how to best create this functionality for managing attributes. It’s not an easy decision so we still have some thinking and defining to do.

My thought is more of a button that would allow you to change the view inside an individual item, showing all of the attributes that the particular item could be hiding at the time. It is easy to find a list of all the attributes that exist in a project; it is hard to remember which items may have had attributes that are now hidden, because they have moved from one folder to another.

I see. Yes, I suppose it can get a bit tough when items are moved around. I’ll add it as a suggestion regarding attribute management. We’ll see what the product team thinks.

I had a thought on this…

If every item had a button on the bottom that says “Hidden Attributes” it would be easy to click on that link allowing you to expand the item to show all the attributes on a board. It would be really nice!

The second part of my thought is the customize button for each view… There could be a button on the end that says "Hidden attributes, and you could “unhide” them from that list. That way there isn’t a new manage attributes view or page that has to be created.

Also… I have been moving items back and forth recently a lot… .I would love to not have to click Move instead of Move and Merge every time a move an item.

Thanks for all you do!

Currently, you can see the hidden attributes in the ‘Customize’ section, which is located in the top right hand of the screen.

Regarding moving items, I can suggest our team to build a ‘Remember’ functionality as a part of ‘Move items’ feature, which would technically remember your preference. Would that work? 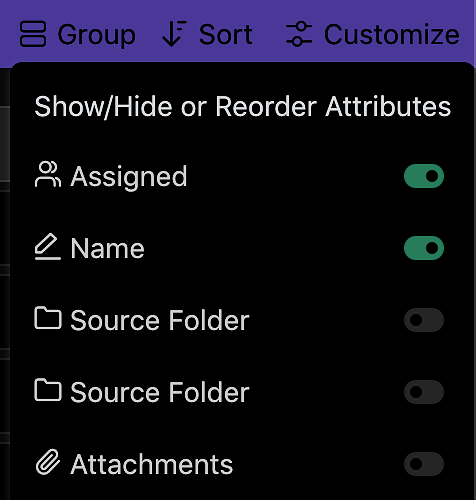 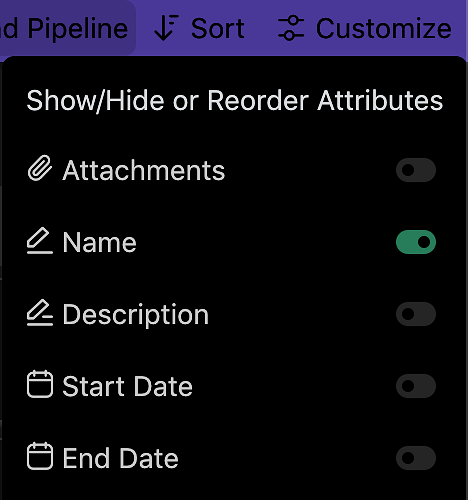 Here are two images of two different folders in my board. The first one is missing company type, and current status (two attributes that exist on some of the cards inside the first folder, but I chose not to “Merge” when I moved them over.

Are those attributes lost since I moved them over?

My original thought was to have another drop-down inside the Customize view that allowed viewing the “Unmerged” Attributes.

If I understood correctly, after you’ve moved an item with just a ‘Move’ option, the attributes belonging to that item disappeared/are not showing in the ‘Customize’ section?

That might be a bug. I’ll try to reproduce a bug. Meanwhile, if you could repeat the process and make a short video/screen recording, that’d be great.

Your suggestion is 100% valid if the case above is true.

Thank you very much! It might be a tiny detail we missed.

So if that is the case, is the only thing that “Merge” does is change the view on the new folder?

‘Move and Merge’ is not supposed to change the view of the folder.

Btw, I’ve tried to reproduce the issue, hence I’ve moved items multiple times from folder A to folder B, but everything seemed okay.

‘Move’ keeps the original attributes of that item, and ‘Move and Merge’ just adds attributes to the certain folder if they’re missing those attributes from folder item has been moved from.

Do you think it’d be possible for you to make a short video?

Sorry for bothering you this much.

Thank you very much!

Maybe there is a misunderstanding going on here… Let me try to explain:

When I move card x to Folder B, I decide to just ‘Move’ instead of ‘Move and Merge.’

Hi @BaiJie, let me answer your questions. Basically you are right about almost everything:

Basically the attributes you don’t merge are not hidden per se as if you hid them in Customize. They are actually gone - but can be brought back if necessary, let’s say.

Hope that was helpful. Let me know if you have any other questions about this.

Thanks! I don’t have any other questions. I do think it would be nice to have some kind of “View Hidden Attributes” functionality, however that can be implemented…