-Tried three separate instances of importing the board and same result each time
-On the fourth attempt (when the page was hung), I tried refreshing the browser tab to start it over, and same result 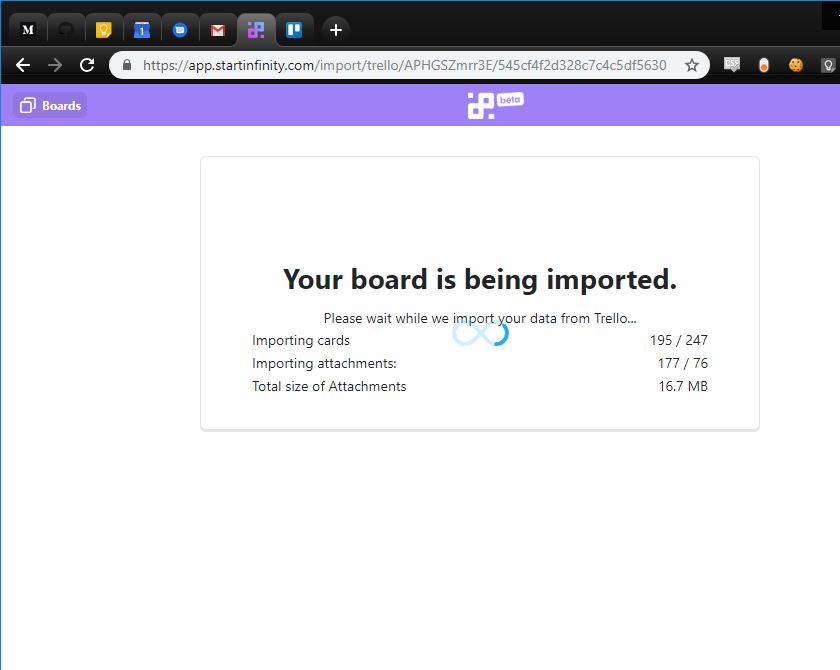 (edit)
When the number is increasing for Importing cards, it gets to 194 then resets to 0, and begins incrementing once more. The number for Importing attachments does not reset itself - it keeps going past 76 without slowing down.

(edit 2)
Tried to import a smaller board with only 18 cards on it. Got the import successful message. But the board is completely blank. Further, I cannot add a folder or make any modifications to the blank board that failed. This has been happening a lot today. I have less than a 25% success rate when importing boards over.

Not sure if you guys pushed a deploy to production that messed some things up, but when I imported over a huge board on Friday, everything was fine. Very weird.

@joe.davis One of the team members acknowledged this issue on facebook somewhere. Unfortunately, I can’t remember where they said this off the top of my head. But yea, they know about it and are working on a solution.

It was working fine before today, so let’s hope the fix isn’t too difficult. I know there was a small update to push the Undo feature out recently, maybe a couple other fixes and tweaks were wrapped into that same deployment.

Hey, yes, we had some error with imports. Some comments from Trello were missing author information for some reason, and our quick fix was to leave author name in those cases blank.

We will take a look at attachments count issue, I suspect that multiple jobs were fired to import same board from Trello to Infinity board.

The dev team pushed out a fix early this morning that fixed the issue. Everything is back to 100% for importing boards.

Thank you for resolving this quickly!!