How do we get more votes? I am seeing a few good ideas come through however i have no way of up voting them other than leaving a comment.

Short of unvoting, do we recover our vote when the idea has been implemented? If yes how do we close out a thread in the forums?

Airtable Discourse forum seems to offer the thread creator a “Solution” button to close the thread? 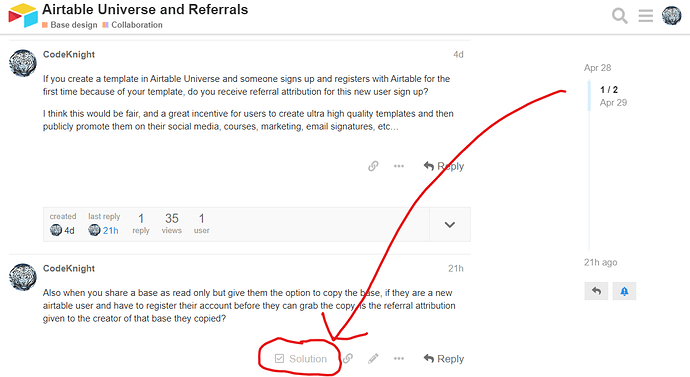 I personally think there should be no limit on votes per person.

I can’t see any disadvantages of giving everyone unlimited votes? If anything it would give a fairer representation of what the community wants. Correct me if i am overlooking something?

I hope the infinity product roadmap board will have infinite votes.

You’ve mentioned Discourse. So yeah, this is Discourse’s forum, and I believe we’ve found the upvote feature on their sort of ‘marketplace’. (i can’t remember for sure, it’s been a year or more from then).

Rather than looking to improve all the things you’ve mentioned so far (which are truly great and I support those changes), I believe it’s better if we focused on finalizing our Roadmap with which we have huge vision regarding ‘moving’ a lot of conversation there

100% agree @coa. I want to do all the things @CodeKnight mentioned in a new Infonity Roadmap Baord

So we are replacing most of discourse with this new product roadmap built in Infinity?

That really would be exciting as i am looking into using discourse for my business, maybe wont be necessary for what i am wanting to achieve.

Mostly regarding the features and their descriptions or ideas/feedback on they could be built (we’ll encourage members share their opinion, mockups, feedback and ideas in the Comments thread, which should also receive a huge improvement).

Seems to me like bug reports and change log could also easily be handled in such a board as well?

Absolutely! Bugs will be reported via our Public form, and stored in an individual folder so we can check them regularly.

And changelogs will be updated in an individual folder as well, using also subfolders for each month.