Thank you very much for sharing.

Great mention, @landofawz
I use Gmail-to-Trello too. There are several Gmail integrations from other apps, as I mentioned in earlier posts, that provide great examples for Infinity to evaluate.

@coa, also consider that Trello, Evernote, Todoist and ClickUp have this same feature set for Outlook/O365 with their Microsoft add-ins. Each is a great example without requiring third party app/extension.

My current solution to address Infinity’s missing email integration feature is using the Trello and ClickUp integrations for both Gmail and O365 in conjunction with Zapier. It works, but having to send to Trello or ClickUp, wait for the Zap, then move the item where I want it in Infinity is a momentum killer. It’s also chewng up my Zapier credits at an already pace. Hope to see infinity catch up soon!

This really is the dream list of integrations for infinity.
https://clickup.com/integrations

Currently, this is what I do

It’s my hack, but works pretty well. I find it smooth without my resistance for me to use.

First of all, @landofawz, great use case (or maybe workaround

). I"m a big fan of GTD (and OKRs btw) and would like to use Infinity exclusively in my workflow. Some time ago I put this suggestion: Team Inbox / Personal Inbox and if it were implemented, the next step would be to have email integration first, and then integration from other apps.

Your suggestion is great, too!

I’m not familiar with the acronym OKR. It sounds great!

OKR = Objectives, Key Results
Although some people say it’s totally diferent from GTS, I like it to help me with focusing in my Engage mode (and can be extended to the whole team/company).

Thanks for the response. That is a pretty good workaround. I use a little easier method.
I setup several Zaps for my most important Trello/Infinity boards. I use the native Trello Gmail and O365 integrations to send any items to an ‘Incoming’ card on each Trello board and then Zapier automatically pushes those cards to the relevant Infinity board.

It all happens in the background and then I can go to Infinity and those items are waiting for me to sort, edit, update. Trello does an exceptional job of pulling in the important points so that the end result is very good. (E.g. if all of the action items that I needed were in the body of the original email, that text is now on the Infinity card. I can easily copy and paste as multiple subtasks.)

I also have several Zapier accounts to keep from going past my free limits during busy weeks.

One more tip if you are like me and have multiple businesses or roles, you can use Wavebox to setup multiple identities where you can easily move between multiple accounts/workspaces in one browser. (I.e. I have 5 Gmail accounts and 2 O365 accounts that I use for different company roles. I have each setup as a profile with all of the apps that I use in that role. I have two Infinity accounts, one tied to a GApps account and one tied to an O365 account. With Wavebox I can swicth between the accounts with a single click without ever having to login or out. That is also how I manage 3 Zapier accounts simultaneously.) 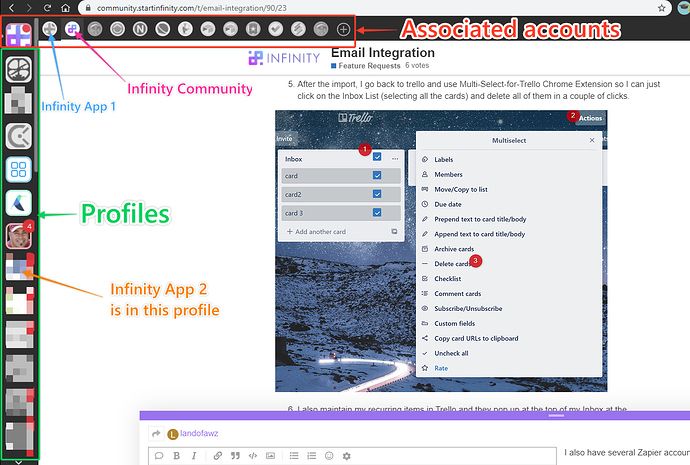 I agree entirely @man
I have been grabbing OKR templates from Trello, ClickUp, Monday, Airtable and anywhere else I can find them, importing them to Trello and then importing those into Infinity. They are not quite right without the email integration (even with some Zapier tinkering) but not too bad.

The one used by Hubspot and Buffer seems to fit one of my teams well (OKR). 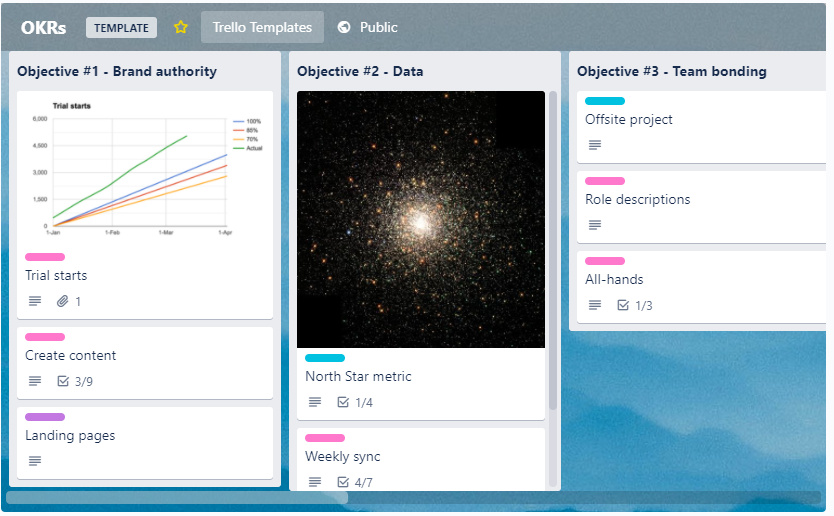 image.jpg834×516 146 KB
One of my clients uses this one: OKR Roadmap
I find the V2MOM method from Salesforce interesting as well.

I am hoping at some point I can get savvy enough with Infinity (assuming the necessary functionality also comes) to build a similar setup to Profit, which is an excellent OKR tool.

Just a huge, huge shout for all of you who have shared your feedback and ideas. You rock!

Same here regarding email to board/card for Trello as well as direct integration in Outlook to add items and actions to add cards from Drafts.

IQTell… oh, the pain and the joy of it all. So, as a new guy (entrepreneur in systems development, digital marketing, social media, independent film, television projects, father, husband and all-around “why not try” guy) on Infinity who has been wandering through Task/Project apps for 40 years, some quick thoughts:

Next, in a variation of the full email integration, there was Flow-E that wrapped itself around both O365 (and still does) and Gmail. Except the email client wars (all connected to the money-making part of the big ISPs like Gmail) heated up and Google’s new requirements for brave but small Flow-E forced them to disable the Gmail integration. Another version of a “full” email integration, half-alive.

Now, I would argue that since most Task solutions are businesses-oriented, no business should be using Gmail because of what it says about your branding (none) and business (yikes, you can’t afford a private email domain?) but that is another thread.

So, please Infinity Team (and I know you already know this is for emphasis mostly) - no need to over-reach on email to task functionality. It is boots-on-the-ground critical in my view. Don’t make Todoist’s mistake of promising it for too long then releasing the “new Version” and not deliver it to then find out that a whole bunch of people who don’t necessarily chime in on Forums wanted it. And so, they went looking elsewhere, as I did to TickTick. If you can then connect my out-going email to the client/task great, too But first thing’s first, right?

OK, end of an old man’s email integration/IQTell/GTD rant… no I mean “post”.

Did I forget to mention that I would really like to see a solid, simple email to task integration? Because based on all the good thinking and exquisite engineering I see already see on these Pages, this is a “no-brainer”.

I wish I had the opportunity to experience IQTell before it went down. People either never heard of it, or quickly named it as their favorite tool. I have used Flow-E, and switched to Infinity just after.