The URL field displays each URL as a small fav.ico.
Is there any way to just have it display the URL? I find it quite irritating to not see the URL itself displayed.

Here’s a request I posted that relates to your request. It concerns to how links URLs display in table view:

Please set the mouse-over tooltips for links in Table view so they display the link’s names instead of their URLs (the way links display in the Right-Side Panel). Being able to see the names of links in Table view would be extremely helpful, especially since via a link’s attribute edit feature, we can assign unique names/descriptions to them. I would be fantastic if we could see those unique names/descriptions in Table view, just as we see them in the Right-Side Panel view. The present behavio…

If you hover your mouse over the favicon, the URL should display. 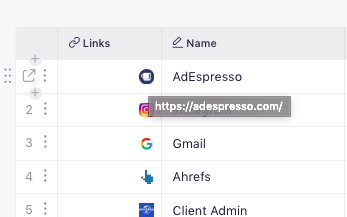 We’re going to improve this feature, of course.

It i snot a bad idea to show the favicon. A lot of sites do not have one though, so its a lot of grey boxes in some tables. favicon + URL display would be good. I mean, not on hover but just displaying it directly. Anyways, noted tht you guys are still working in this.

By the way I noted one thing. Imported boards that were imported from csv do not show a favicon in the link field, even when they have one. They need to be saved again in same field and then it is populated. Not sure that is expected behavior.

After using this for a while I do have to say though that it is very useful to be able to put several links into one cell. Makes some of my tables much more organized.